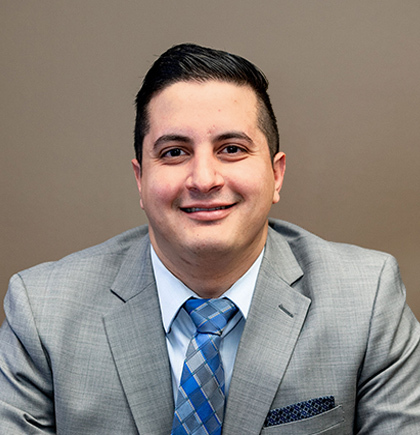 George was born in Pittsburgh, Pennsylvania, but he mostly grew up in the sunshine of South Florida. It was there where George developed a love for the water, spending many days and weekends on the boat, fishing, and at the beach. George loves sports, and he regularly gets out to play football, basketball, golf, or any other sport as much as possible.

In 2013, George earned a Bachelor of Arts in Political Science with a minor in Communications from the University of Central Florida. George then began law school at Nova Southeastern University in Fort Lauderdale, Florida, earning his Juris Doctor in 2016. While in law school, George worked as a law clerk for a reputable South Florida law firm doing personal injury defense. This is where George first began learning the intricacies of how insurance companies truly evaluate an injured victim’s claim.

George was admitted to practice law in the State of Florida in 2016, and he spent three years working as a personal injury protection (PIP) and homeowner’s insurance defense attorney in Fort Lauderdale for a large national law firm. During that time, George gained valuable experience, including in the courtroom as an advocate, crafting legal arguments and drafting documents, and engaging and communicating with all parties involved in lawsuits. George also further advanced his knowledge of how insurance companies function from within.

In 2018, while traveling, George met his eventual and lovely wife, a native Coloradan. The two dated long distance for a year, and George would regularly visit her in Colorado. George relocated to Colorado in 2019 to be with his soon to be wife and her two sons, sat for the Colorado Bar Exam, and became licensed to practice law in the State of Colorado in November 2019. The two were married here in Colorado in January 2021.

George joined the Bendinelli Law Firm as a Denver personal injury attorney in November 2019, and he quickly found his passion for helping his clients and forcing insurance companies to treat them fairly. Outside of work, George enjoys spending time with his family and friends, snowboarding, exploring all that Colorado has to offer, and watching college football and the NFL (Go Steelers!).