There are many motorcyclists in and around the Denver area.  In this state, there are plenty of areas to ride and enjoy the scenery and great riding weather throughout much of the year. However, there are various areas of the roadway that present particular dangers to motorcyclists. One of the most dangerous places for a motorcyclist is an intersection. Intersections are areas where multiple vehicles converge, and just about every driver is trying to accomplish something different. Unfortunately, this often means that motorists fail to yield the right of way to oncoming motorcycles, leading to left-turn accidents. 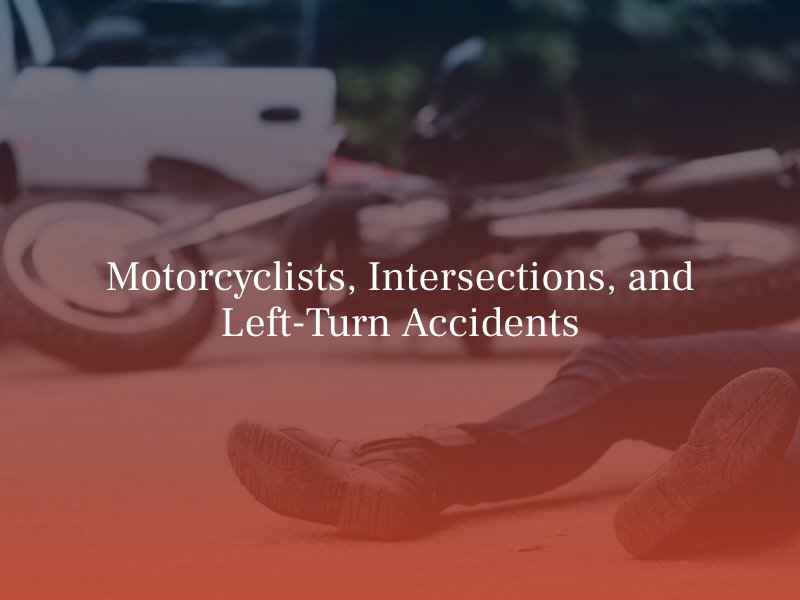 Intersections and the Dangers They Present

Intersections present major challenges for drivers in every type of vehicle, including those in passenger vehicles and large trucks, as well as pedestrians, bicyclists, and motorcyclists. Intersections are areas where so many different groups of people end up converging together, with most people trying to accomplish different things. In essence, intersections present areas where drivers have to follow important laws in order to choreograph an intricate “dance” of sorts so that everybody can get to their destinations safely.

Unfortunately, intersections are also areas where accidents occur regularly. Some of the most common causes of intersection crashes that occur in Denver and throughout Colorado include the following:

Intersection accidents often result in devastating injuries for those involved. This is particularly true for motorcyclists because they lack much of the same types of protections that those riding inside traditional passenger vehicles have. There are no airbags, seatbelts, or metal frames that offer protection to a motorcyclist. Instead, motorcyclists often sustain two impacts when an intersection collision occurs – one with the vehicle and another with the roadway.

What is a Left-Turn Accident?

One of the most common causes of motorcycle crashes at intersections is left-turn incidents. Left turns are incredibly dangerous at an intersection because they typically involve a vehicle or a motorcycle crossing a lane of oncoming traffic. In theory, no person should be making a left turn unless they have the right of way to do so and if oncoming traffic is far enough away to make the turn safely. Ideally, all left turns would be made with a green arrow signal and while oncoming traffic is stopped at a red light. However, these turns often involve drivers at a yellow blinking light making a turn when they think traffic is far enough away and it is safe to do so.

This can cause severe injuries for a motorcyclist in a variety of ways. In some cases, a motorcyclist will be the one making a left turn. If they choose to turn when oncoming traffic is too close, this could lead to a devastating collision with a motor vehicle. These crashes can also occur when the motorcyclist has the right of way, and another vehicle fails to properly yield and pulls out in front of them. These incidents can lead to a motorcyclist slamming into the side of a turning vehicle, causing severe injuries.

If you or somebody you love has been injured in an intersection or left turn accident caused by the actions of another driver on the roadway, you need to work with a skilled Denver motorcycle accident attorney as soon as possible. An attorney can use their resources to conduct a complete investigation into the incident and help an injured motorcyclist recovered the compensation they are entitled to.