A Sudden Stop Can Cause Serious Injury to a Motorcyclist 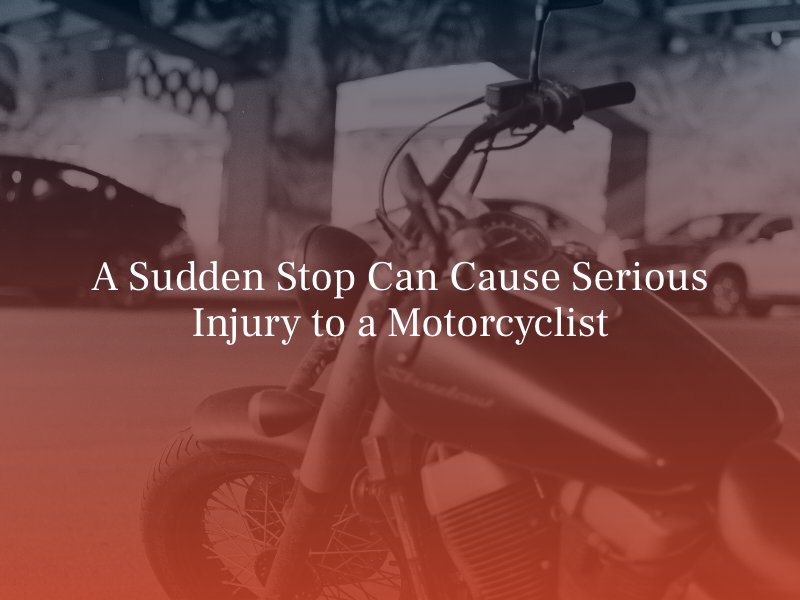 What are “Sudden Stop Motorcycle Accidents?”

One of the most common causes of motorcycle accidents involves sudden stops. Unfortunately, sudden stops can result in much more dangerous situations for a motorcyclist than for traditional passenger vehicles. When regular vehicles come to a sudden stop, they may skid a little bit, and they could even strike the vehicle in front of them or go off the road.

However, a sudden stop can cause a motorcycle to cartwheel forward, turn end-over-end, and catapult the motorcycle rider onto the roadway or off the road. Unfortunately, these incidents often result in serious injuries or motorcyclist death, particularly if the rider strikes any objects while moving at high speeds. Additionally, these sudden stop accidents could lead to a motorcyclist slamming directly into a vehicle in front of them with no time to react.

There are various ways that motorcycle sudden stop accidents can occur. This includes, but is not limited to, the following:

It is not uncommon for individuals involved in these accidents to sustain one or more of the following:

Who Will be At-Fault for a Sudden Stop Motorcycle Accident?

In order for a motorcyclist to be able to bring an injury claim or file a personal injury lawsuit against another party, they will have to show that someone else was at fault for their injuries. In general, all drivers on the roadway, including motorcyclists, are required to leave enough space between themselves and vehicles in front of them so that they can slow down appropriately if a sudden stop occurs. Rear-end accidents caused by sudden stops are often the fault of the rear driver.