After a Crash, Are Insurers, Police and Juries Biased Against Motorcycle Riders?

Accidents involving motorcycles are not uncommon in Colorado. These incidents often result in severe injuries for a motorcyclist. Even when a motorcyclist is wearing a helmet and other protective gear, it is not uncommon for them to sustain significant injuries that lead to long-lasting disabilities. Injured motorcyclists should be able to secure compensation if the accident was caused by the careless or negligent actions of another driver. Unfortunately, there are times when police officers, insurance carriers, and even juries are biased against motorcyclists. Here, we want to discuss why this is the case and how this problem can be overcome.

Why is There a Bias Against Motorcyclists?

While this may not seem like a big deal, this negative bias towards motorcyclists could have significant implications when it comes to a crash that may involve a motorcycle. For example, suppose a motorcyclist is struck by a reckless driver. The police will come to the scene, but they may assume that the motorcyclist caused the crash. This immediately begins a chain of events that could influence the overall ability of the motorcyclist to obtain compensation. 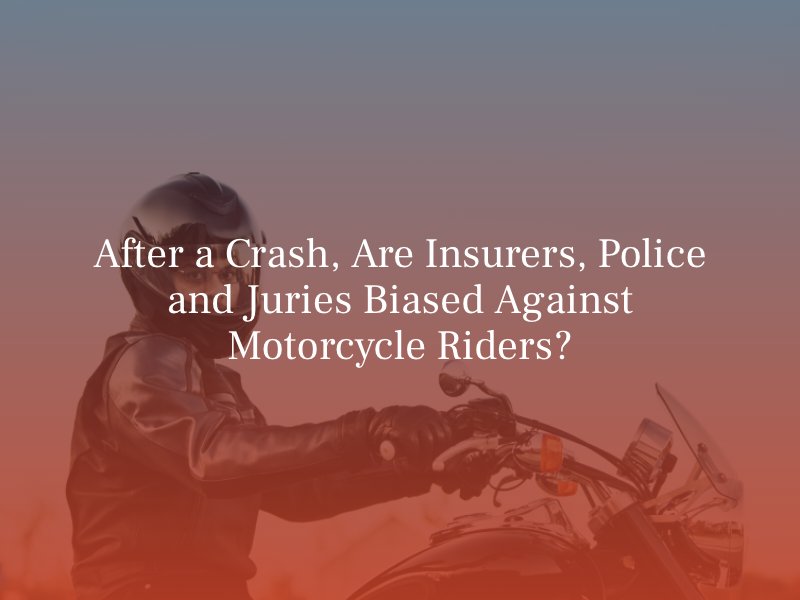 Suppose the police officers who respond to the scene assume that the accident caused because the motorcyclist was speeding or operating recklessly. They could assign much more of the fault to the motorcyclist than is warranted. Because insurance carriers rely so heavily on accident reports, this could create an uphill battle for a motorcyclist when it comes to securing their compensation.

Finally, if a case goes all the way to a jury, the jurors will have these same biases. This could significantly affect whether or not they determine that other parties are responsible for the crash and how much compensation they award.

Overcoming a Bias Against Motorcyclists

The best way to overcome the bias against motorcyclists after an accident occurs is to seek experienced legal representation. A skilled Denver motorcycle accident lawyer in Colorado is the absolute best way for a motorcyclist to obtain compensation after being involved in an accident caused by another driver. An attorney will be able to create a strong case to help overcome these negative stereotypes that motorcyclists face. Facts and evidence are very hard to dispute when they are presented clearly.

An attorney can use their resources to obtain all evidence needed to prove liability, including photo or video surveillance, statements from eyewitnesses, accident reports, vehicle “black box” data, mobile device data, and more.

Additionally, we strongly encourage motorcyclists to buy a camera to go on their motorcycle or their helmet. When a motorcyclist has video evidence that could show that a driver caused the crash, this would be very hard for insurance carriers or a jury to refute.