Curb Your Anger on the Road and Prevent Road Rage 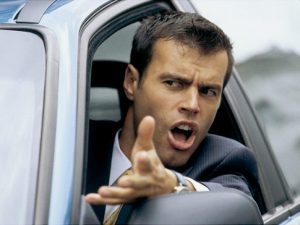 As we take to the roads for our daily commute to work or school, it is likely that we’ve seen people driving in anger, honking their horn, or any number of aggressive actions that can quickly escalate into road rage.

According to DMV.org, road rage is, “…aggressive or violent behavior stemming from a driver’s uncontrolled anger at the actions of another motorist.” Simple actions such as not using your blinker, speeding, honking, or tailgating can quickly escalate into a more violent and severe road rage car accident.

In Colorado, road rage and aggressive driving incidences have been on the rise. In the first two months of 2016, the Colorado State Patrol received 7,594 calls reporting aggressive drivers, a 22% increase from 2015 during the same period.

Reportings of unsafe or aggressive drivers in the Denver Metro Area are tracked. The Colorado State Patrol sends out a warning letter after three complaints, hand delivers a letter after five complaints, and the has the option of keeping an eye on the drivers’ future behavior.

It’s important to remember that your behavior while you drive effects more than just you, it also effects your passengers and other’s on the road. In a road rage related car accident in December 2016, a truck driver was seen driving recklessly and aggressively on Interstate 76. While attempting to pass a semi-truck in the shoulder the truck driver lost control and drove through a guardrail and crashed on the street below.

Running late for work or school, or even having a bad day might make you drive differently than your normal habits, but it is not worth it when it could mean harming yourself or others on the roadway. The best way to prevent a car crash caused by road rage and aggressive driving is to drive defensively. Slow down and focus on getting to your destination while following traffic laws and driving safely. Someone cut you off? Maybe their day is going just as poorly as yours is, and it is always better to cut other drivers some slack than creating a situation where you may end up hurt or worse.

If you have been injured in an aggressive driving or road rage car accident, contact the Denver car accident lawyers at Bendinelli Law Firm for a free consultation on your case.