Who Is At Risk Of Road Rash?

If you or a loved one regularly ride motorcycles or bicycles, then you understand there is possibility of sustaining significant injuries. However, one of the lesser-talked about injuries associated with motorcycling and bicycling is road rash.

Road rash is one of the most common injuries associated with operating a motorcycle or riding a bicycle, but it can also occur in other types of accidents as well, including those involving traditional vehicles or even electric scooters. Here, we are going to discuss road rash injuries more in-depth so you have an idea of what to expect if someone you know, or even yourself, sustains this type of injury. 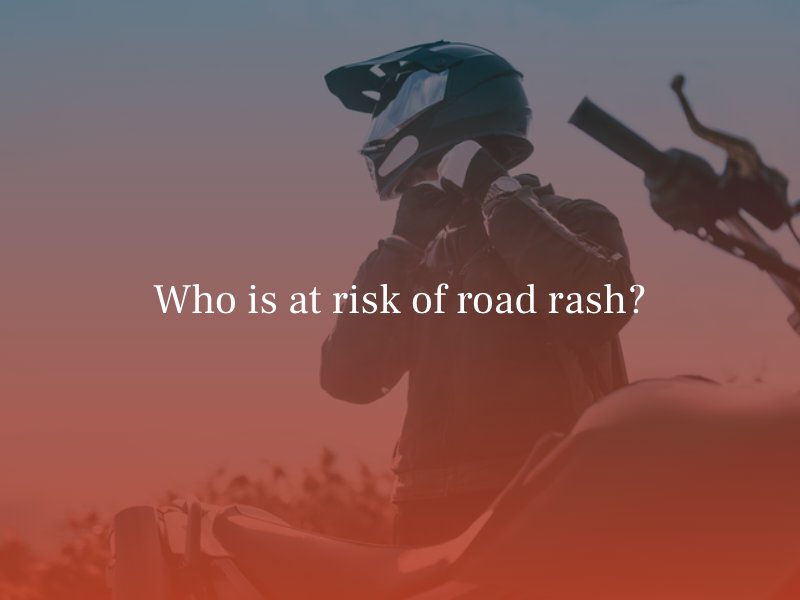 What is Road Rash?

Road rash is a common term used to describe a skin abrasion that results from a person’s skin scraping across a rough surface. In general, this usually means a person has been involved in an accident and their skin has scraped across the pavement. This type of injury can occur on any body part that does not have clothing over it (and even clothed areas if the crash is severe enough). In general, road rash is associated with a person’s jointed areas, including their knees and elbows. Additionally, road rash injuries to the face, hands, ankles, shoulders, and shins are not uncommon.

Not all road rash injuries look exactly the same. There are different types of road rash, including the following:

As we mentioned above, motorcyclists and bicyclists are more likely than others to sustain road rash injuries due to the very nature of riding on these vehicles. However, road rash injuries are becoming more common amongst electric scooter riders, particularly as these vehicles become more popular. Additionally, any person ejected from a vehicle involved in a motorcycle accident can experience road rash just like these other victims.

Some of the symptoms that indicate the need for prompt medical care in these situations include the following:

How do You Treat Road Rash?

For more serious second- or third-degree road rash wounds, there may need to be extensive treatment rendered by a doctor. This can include the need for X-rays, a monitoring of vital signs, IV antibiotics, tetanus shots, and even surgery.